Al began the meeting with a moment of silence for the passing of Faye Swanson – VP Trails.

The Villages Board has approved projects to eliminate and redirect the Garden Steps trail, and to create additional work on the Meadow trail.

The Hiking Club (HC) has offered to put $1,000 toward the purchase of a new picnic table at the top of Meadow.  The Villages stated they would prefer to buy it themselves and have the HC contribute after purchase.

The HC did install a mailbox at the top of Meadow (at the NE corner of the Hill Lands property), and another mailbox at the entrance to the Joe March Trail.

These improvements have, in part, been made or proposed to increase use of the Northern trails in the Hill Lands.  Al reminded all that parking is available in the cul de sac at the top of Valle Vista, which can move traffic away from the small lot at the Upper Gardens.

One additional project the HC would like to see realized is the placement of 3ft by 5ft signs at trailheads like the “you are here” signs typically seen at ski resorts.

Deb asked for approval of the August 30, 2021 General Membership Meeting Minutes. Judy Gergurich made the motion with a second from Cheryl Allmen.  And the motion passed unanimously.

After Sandy presented the above report, Wate Bakker moved to approve the Treasurer’s report with a second by Joanna Bakker, and the motion passed unanimously.

Sunshine Committee – Sandy reported one hand-made card by Terri Vivoli was sent to Vera Girolami who is recovering from a month-long illness. Additionally, one such card with condolences will be sent to Faye Swanson’s family.

Jim introduced Bev Wharton who is the person with the longest HC membership dating back to 1980.  Bev gave Jim an article on Joe Marsh and five copies of the HC history.

Update on Faye Swanson’s Passing - Jim is working on a memorial to be held on a Saturday (date TBD) at Foothill Center.  He plans to have a slide show and is inviting attendees to speak about their remembrances of Faye. Jim passed along an offer made by Fay’s son to anyone with an interest in receiving any of Faye’s hiking gear/equipment.  Please contact Jim if you have interest.

Michelle reported out on a hike preview she recently completed at Cotoni-Coast Dairies National monument north of Santa Cruz.  The site, while only somewhat developed, remains a work-in-progress on an unpaved road.  The group she hiked with will do a hike with the HC privately at a time convenient to us.  Michelle suggests targeting a time in the Spring.

Upcoming socials include Game Night on November 11, 2021, and the Hidden Paths walk on November 27, 2021.  Details for both will follow at a later date.

Pismo Beach Trip Oct 5-6, 2021 Michelle advised the details for this outing have been finalized.  Carpooling is suggested. After a question by Al about the possibility of last-minute sign-ups, Sandy Petrin reported the reservation date for the Pismo Beach hotel had passed and that we relinquished any unbooked rooms, but there would be no harm in phoning the hotel to see if any rooms remained available.  Michelle said it would certainly be possible to reserve a meal at the Wednesday HC group dinner. Sandy and John Petrin have all Rambler-type hikes planned.  Michelle has just received Faye’s maps for Long Hikes in the Pismo Beach area.  Michelle and Deb will study the maps and select the hiking routes for the outing.  Michelle has information on some additional activities in the Pismo Beach area.  This includes the following: Kayaking, the San Luis Obispo (SLO) Thursday night Farmers’ Market and Entertainment, and Bruce Munro’s Sensorio light show in Paso Robles.  Michelle will provide links to these activities to those interested.

Al said it is time to form a slate of potential HC Board candidates.  Positions currently open include President, VP Hiking & Trails, and VP Social.  Al and Dan Kato are seeking candidates for these open positions (or any Board position) and urge anyone interested to step up and volunteer.  The slate must be presented at the October 2021 General Membership Meeting for a membership vote.

Cheryl Allmen stood to urge others to join her in thanking the current Board for all their efforts over the past two years. She pointed out that despite the pandemic, this Board continued with Zoom meetings and with getting things done for the Hill Lands.

Susan Brown announced she was passing around a sign-up sheet for people to provide cookies at HC meetings through May 2022.

After the business meeting, Peter Holmes presented a very informative talk on Wild Mushrooms, which received much interest from the membership.

December – No meetings are scheduled

Meeting Adjourned - The meeting adjourned at 8:15pm after a motion by Cheryl Allmen and seconded by Mary Stradner.

Called to Order: 9:03am by President Al Girolami

In an email Sunday night September 19, 2021 and with a heavy heart Al Girolami announced the passing of Faye Swanson (VP Trails) that night.

Faye’s daughter Erica, reached out to Jim Beyer this week and he met with Faye’s three children. Erica said OK to a Village’s Memorial service for her. Faye’s two sons, Charles, and Miles will also plan to attend. Jim said all three children were a pleasure to deal with, but they said Faye’s husband Ray might not attend the Memorial.

Erica said the cremation process should take about three weeks to complete, and that Faye’s condo will be put up for sale in due course.

The children also told Jim that Faye was at her happiest while at the Village’s and active with the library in addition to the Hiking Club (HC). Jim encouraged Erica to place an article about Faye in the Villager and gave her the Villager contact info.

Jim volunteered to take the lead for all activities for Faye related to the HC.  It was suggested to Jim to invite Faye’s sister-in-law to the Memorial Service. She lives near San Luis Obispo and Faye was close to her in recent years.

Sandy Petrin made a motion to approve the minutes of the August 26, 2021, Board Meeting.  Jim Beyer seconded the motion and it passed unanimously.

The preceding Financial Report was approved by a motion made by Gordon, and seconded by Michelle, and it passed unanimously.

Sunshine Committee – Sandy is standing by to determine who shall receive a hand-painted condolence card by Terri Vivoli for Faye Swanson.  Jim Beyer says Faye’s daughter Erica is the executor of Faye’s affairs, so he will get her address and send it to Sandy. Jim also said we need to decide what to do with the $50.00 usually donated as directed by the family. Al said his wife Vera is not in good shape and has been in the hospital for 33 days. Al asked if another card can be sent to Vera as it lifts her spirits. Sandy will coordinate this with Terri.

Jim reported with a few new HC members in September and the revised status of Faye, the total current membership now stands at 304.  Al asked Jim to try to recognize new members at the next general membership meeting.

Given Faye’s passing, Dan Kato is willing to help with this function on an interim basis, along with assistance from Jim and Al.  Dan will focus on long hikes, plus getting information from hike leaders passed along to the General Membership. Jim will help with newspaper write-ups and coordinating interface with the Villager staff.  Also, Dan asked Jim Beyer for a list of members to review to possibly approach for hike-leader positions.

The Board also unanimously agreed to give a $50 gift card each to Michelle’s son John, and his girlfriend Alicia, who both helped tremendously supporting the HC’s Summer Picnic.

Michelle advised the Pismo Beach Outing is now down to 33 people, and thus will likely run a deficit.  This arose due to some late cancelations by some members and the agreed dinner minimum with the Cracked Crab restaurant.  This was further complicated by the fact that at least 3 couples asked to split a meal, which is not ideal (loss of $200 revenue) with the type of table dinner Cracked Crab serves. Michelle hopes the deficit will be mitigated by the anticipated bar bill.  Also, Michelle advised in the future to tell members upfront that split meals are not allowed. In any event, Michelle said the Restaurant and Hotel have been accommodating.  Dan Kato and Deb Siedband will work to suggest long hikes in the Pismo area. Sandy and John Petrin will organize the Rambler hikes.

Michelle informed all her final Board Meeting will be the October meeting.

Al tabled discussions on the HC T-shirts and preparing the 2022 Meeting Schedule for distribution to members till the Next Board Meeting.

Al says both new table/benches have been installed by the VGCC in the Hill Lands on Buffalo and Upper Meadow Trails, so that project is completed.

There is no new news about the status of the new picnic table to be purchased (HC pays) and installed by the VGCC near the NE corner of the Hill Lands.

Michelle advised that the Wildland Fire Manager from the SJ (San Jose) FD has agreed to hike the Hill Lands with us (w/Bill Johnston) to investigate local wildfire risk of years of underbrush build-up, which is a severe fire hazard to VGCC.  Re-introducing cattle grazing may help in this effort.

Al asked Sandy to start preparing the 2022 HC Budget to be adopted in November 2021. Al suggested using the 2021 budget as the template for the 2022 budget except to incorporate another $500.00 transfer from the HC main account to the Hill Lands account. We did this in 2019, but not in 2020 due to COVID concerns. Sandy asked and got approval to order more checks

Meeting Adjourned - The meeting adjourned at 10:03a after a motion by Jim and second by Sandy. 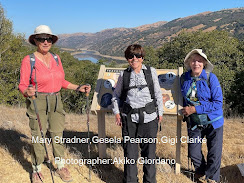 On Saturday, October 16th, Gesela Pierson led a long hike of about 8 miles at Harvey Bear Park starting at the Mendoza Ranch entrance. They went up to Mummy Mountain over looking Coyote Lake where they observed fall colors on the trees. 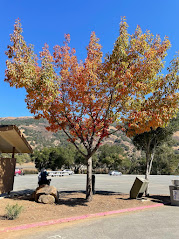